Honour: A dog that waits while another retrieves is said to have honoured.

Depending on the temperament and drive of your dog you will either sail through the honouring part of your training, or will go into line when you have to honour in a state of dread and anxiety, knowing that there is no way your dog will remain steady while another dog is running out to retrieve that oh-so-desirable dummy or bird. 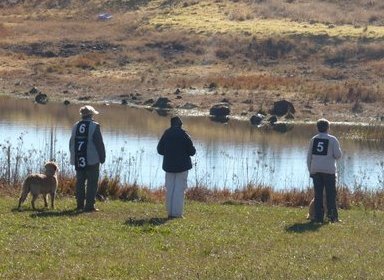 Some of the watch points would be –

The event style of honouring goes smoothest if it makes sense to the dog. If you practice the sequence he can see that the cues differ from those that predict he will be sent. Also, for a young inexperienced dog it is possible to design the session so that the stimuli are not so overwhelmingly exciting that he can’t think about what’s going on and what he has seen.

So, for the young dog with a lot of retrieve drive, begin by making things simpler for him than a “formal honour at the line”. Once he has delivered his retrieve, heel him away from the line – far enough away so that it really does not look like the “line” to him and so “dilute” his excitement level a little. You are taking away the environmental cue of being in the line means a retrieve. You will also let him watch the “working” dog come into line as this will also become a cue that the next retrieve will not be for him. The departure of that dog to retrieve will also be a cue to relax and expect something different than being sent.

The moment the working dog is sent and after your dog has seen it take off, get your dog’s attention and get him focussed on you. Don’t even worry about getting him to sit – this will come later – he can just be standing there on his leash, still excited because he has just retrieved and wondering what is happening next. He hears gunfire, sees another dog take off, and instead of thinking about running out to get the retrieve he immediately orients back to his handler.

Orienting to you can be rewarded by giving him a treat as soon as you see him notice the other dog’s departure. After a couple of sessions once he is offering you his focus when the other dog departs, you can start cueing him to sit when he resisters the working dog’s departure, followed by a treat. If he won’t accept treats in this circumstance, substitute some praise or petting. Then walk him quietly away on leash “under control” so it is good to not develop habits that are the opposite of control.

With repetition you will see your dog visibly relaxing the moment the other dog is sent and voluntarily (no cue from you needed) turning his attention on you since he expects that a departing working dog means focus on my handler now. At this stage you can occasionally dor a formal honour where he is a sit adjacent to the line.

If you have a dog that is still going crazy even after you have left the area of the line, then move him to an area where he does not actually see the throw, but can hear the gunshot and hear the working handler’s release cue.

This entry was posted on Monday, August 25th, 2014 at 1:50 pm and is filed under Retriever Training. You can follow any responses to this entry through the RSS 2.0 feed. You can leave a response, or trackback from your own site.

One Response to Honouring in Retriever Training