The Golden Retriever – a Timeline

The Golden Retriever we know and love today was the result of one man’s dedication to breed the perfect dog. Lord Tweedmouth was an English Peer who had a vision of a pure yellow retriever dog who would retrieve birds during hunts.
His quest began in 1865 when he visited the Earl of Chichester who was a dog breeder.  Lord Tweedmouth bought a single yellow wavy coated puppy from a litter of black Retrievers. The dogs name was Nous, and he was the foundation of the Golden Retriever breed.
In 1867 Lord Tweedmouth was given a Water Spaniel bitch, whom he named Belle. The following year Belle gave birth to four yellow bitches, Nous was the proud father. One of the puppies was named Cowslip (after an English wild flower) and in 1873 she bred with another Water Spaniel and Topsy was born.
In 1876 Cowslip was bred with a Red Setter and Jack was born. Topsy was bred with a black wavy coated Retriever named Sambo which led to the birth of Zoe. Zoe was then inbred with Jack who became parents to Gill and Nous II 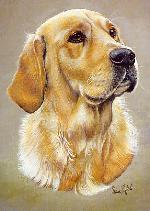 Gill was then bred with a black Retriever called Tracer which led to the birth of Quennie in 1882. In 1889 Quennie was inbred with Nous II which resulted in Prim and Rose. Prim and Rose were 47% Setter 35% Lesser St.Johns Newsfoundland 12% Springer Spaniel 6% Water Dog.
The quest for the beautiful, intelligent, graceful Golden Retriever lasted for a quarter of a century.
In 1913 The Kennel Club registered Golden Retrievers as a distinct breed. Golden Retrievers have been imported to countries all over the world where they have been admired and well loved.

The Retriever – an Introduction

Retrievers were bred primarily to retrieve birds or other prey and return them to the hunter without damage. They comprise the more popular breeds, such as Labrador Retrievers, Golden Retrievers, the Chesapeake Bay Retriever and the Flatcoat Retriever.  There are many more dogs that are classified as retrievers, such as the Boykin Spaniel, the Curly-coated retriever, the Portuguese Water Dog and the Newfoundland, to name a few.  However, these are not often seen either as hunting companions or at competition, and the Labrador and Golden Retriever are by far the most popular.

To be effective sporting dogs, retrievers need to have certain qualities which set them apart from other breeds which have not been bred for the purpose of retrieving game.  The function of a retriever is to seek and retrieve “fallen” game when required to do so.  He should sit quietly on line or in the blind, walk at heel or assume any station designated by his handler until sent to retrieve.  When required, he should retrieve quickly and briskly without unduly disturbing too much ground, and should deliver tenderly to hand.  He should then await further instruction.  Accurate marking is of primary importance.  A dog which marks the fall of the bird, uses the wind and takes direction from his handler when required to do so, is of great value.

A good retriever should be in possession of the following natural abilities. These qualities are inherent in a good retriever and should not have to be trained, merely enhanced. 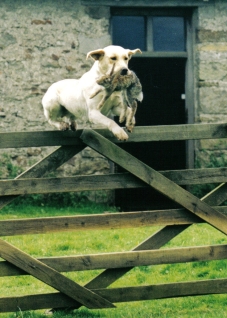 In addition to these qualities, he should also be trained to be steady to wing and shot, to respond to direction and deliver to hand.

During the nineteenth century, there was an ongoing quest among the British gentry for the perfect hunting dog. As a result, most of today’s retrievers and many other hunting dogs have their roots in these early efforts. Many attempted this goal by acquiring and breeding good hunting dogs, using outcrosses to other breeds in an effort to bring in other desirable qualities. Sometimes this worked, more often it did not. That the exact origins of several of the retriever breeds is unclear is due to the somewhat haphazard or occasionally secretive methods used at the time.  We will explore in greater detail some of these efforts.

Puppies and Toddlers – do they go together? 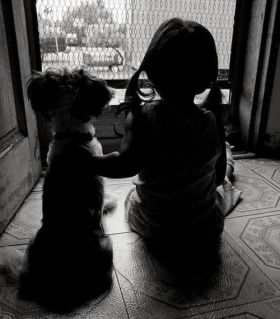 Contrary to popular belief, puppies and toddlers or very young children do not necessarily go together.  Unless specifically socialized to toddlers and very young children, the pup cannot be expected to know how to behave around small children.  And, small children cannot be expected to know how to behave around puppies and dogs.  Puppies have very sharp teeth, and might bite if they feel threatened or are hurt or if they get over-excited.  Small children tend to think of puppies as fluffy toys and don’t understand that these are living things. They think they’re just really cool toys.  They tend to hug too tightly, pull ears and tails and carry or hold puppy inappropriately.
There are things you can do if you have pups and toddlers together to make things go smoothly and without incident.
1.       Never leave young children and puppies alone together – even for a moment.  If you cannot supervise, either put your pup into a crate or into another room.
2.      Do not allow your toddler to hug, kiss, follow or chase the pup, pull ears, fur or tail.  Show your toddler, by example, how to pet your puppy.  If your toddler does get rough, tell him or her firmly “NO NO. That hurts puppy. He’s a BABY DOG.”
3.      Make your pup’s crate or sleeping area off-limits to your toddler.
4.      Do not allow your toddler to take away a bone or toy.  But make sure you play the Take/Leave game with your pup to show him or her that it’s ok to have things taken away.
5.      Do not allow your toddler to carry your pup.  The only way pup can be held is if your toddler is sitting down on the floor.  Even then, supervise closely to be sure that pup isn’t being squeezed too tightly.
Use food rewards to desensitize the pup to the things a toddler may do. Recognize warning signs from the pup, such as moving away, half moon eye, licking chops when not eating, yawning when not tired, sudden scratching.  If the pup becomes fearful of small children because he has been traumatized this fearfulness may become aggression towards small children later in the dog’s life.  Try to make your pup’s interactions with toddlers as pleasant an experience as you can in the critical period of socialization.

If you are thinking of getting a puppy as a “playmate” for your toddler, please give it a lot of thought. Do not be seduced by sentimental pictures such as these in this article. Toddlers require so much time, and puppies can be almost as demanding as children. And the early stages of a puppy are so important – the time and effort you put into the first two years in training and shaping their behaviour pays off years down the road. It would be a real challenge to train and socialize a puppy at the same time as having a toddler.”